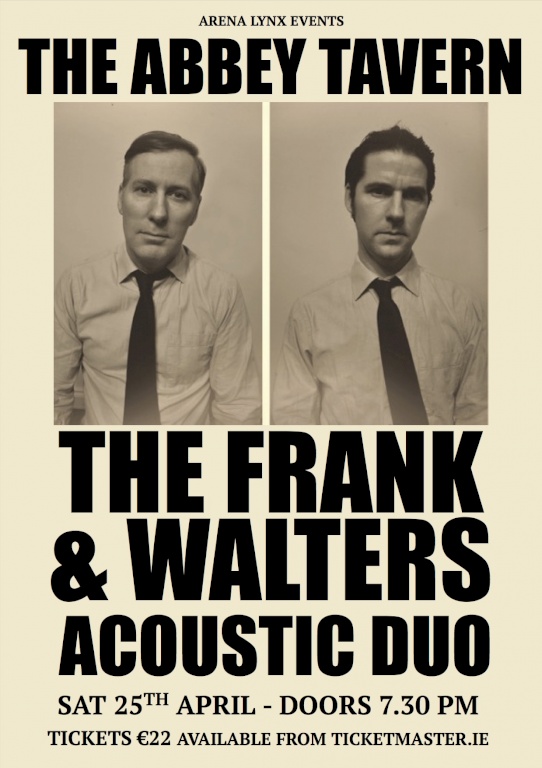 The Frank and Walters are out on the road for a series of intimate acoustic gigs.With a back catalogue of hundreds of songs penned over 3 decades the band play all your favourites and some long lost classics in all their acoustic glory.Paul also shares some of the stories behind the songs and anecdotes from the hippy diddly crazy world of life in one of Irelands most enduring bands. Expect to hear hits such as ‘After All’ and ‘Fashion crisis hits New York’ coupled with timeless classics like ‘How can I exist’ and ‘Landslide’. Paul said “It’s been a while since we’d done any acoustic gigs so we've dusted off our acoustic guitars and I can’t wait to share the songs and stories with our fans, old and new”The Frank and Walters Paul Linehan is one of Ireland’s most talented and inspirational singer / songwriters.Recently the band captured a whole new audience when their ‘90’s hit single ‘After All’ featured on the cult comedy show ‘The Young Offenders’ (the infamous ‘Billy Murphy’ bus hijack scene). And as well as being able to recall stories of Radiohead and Suede supporting the Frank and Walters on early tours, their recent single featured Peaky Blinders Cillian Murphy doing a voiceover on the track ‘Stages’.

The band are taking to the road to share the hits and their favourite long lost classics in all their acoustic glory. The lyrical and musical genius of Linehan’s song writing is laid bare in this intimate format and the true magic of the songs, coupled with Paul’s engaging personality shines through.